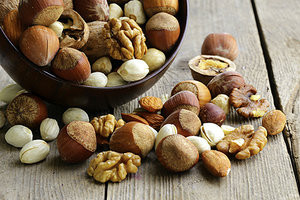 A 2015 prospective study published in the International Journal of Epidemiology found individuals who ate at least 10 grams of nuts or peanuts per day (a handful) had a lower risk of dying from several major causes of death compared to individuals who didn’t consume nuts or peanuts. The reduction in mortality was strongest for respiratory disease, neurodegenerative disease and diabetes, followed by cancer and cardiovascular diseases. The protective effects were equal in men and women. In this study, carried out within the Netherlands Cohort Study, which began in 1986, following 120,000 Dutch men and women, 55-69 years old, peanuts showed at least as strong a reduction in mortality risk as tree nuts.

The associations between nuts and peanut intake and cardiovascular death in this study confirmed earlier results from American and Asian studies, which focused on cardiovascular disease. Data from the Netherlands Cohort Study found mortality due to cancer, diabetes, respiratory, and neurodegenerative diseases also was lower among consumers of peanuts and nuts.1

Emerging evidence suggests regular consumption of nuts may be an additional way of reducing risk of cardiovascular disease, some cancers and possibly type 2 diabetes and neurodegenerative diseases. The evidence appears to be quite impressive for cardiovascular disease and all-cause mortality. In the past, we cautioned patients about eating nuts because they are quite high in total fat, which may contribute to weight gain and obesity. The trick appears to be controlling the quantity consumed – getting enough to acquire the protective effects, but not so much that it promotes weight gain.

The American Heart Association recommends eating four servings of unsalted, unoiled nuts a week. A serving size is defined as a small handful or 1.5 ounces of whole nuts, or 2 tablespoons of natural nut butter (unprocessed).2

Peanuts and tree nuts both contain various compounds such as monounsaturated and polyunsaturated fatty acids (including alpha-linolenic acid – an omega-3 that is quite high in walnuts), various vitamins, fiber, antioxidants, and other bioactive compounds (such as arginine) that may explain their purported protective effects. Some of these effects are likely related to their antioxidant, anti-inflammatory and endothelial function-maintaining properties.1-2,4

Based on the emerging research, I suggest you encourage patients to eat nuts as a healthy alternative snack to other undesirable “chippy-dippy” types of snacks (e.g. potato chips, nacho chips etc.). Even for lower-income patients, peanuts remain affordable and provide some additional protein to the diet.

It appears including walnuts in a person’s nut intake may be particularly desirable, if budget allows for it. Walnuts are particularly rich in protective nutrients and are associated with positive health outcomes in many studies. The protective effects of walnuts may even include a reduction in risk of breast and prostate cancer, according to epidemiological studies and intervention trials with mice.

Given the emerging studies suggesting nut consumption may help reduce risk of major health conditions, as well as all-cause mortality, I believe it is time to encourage patients to consume at least a handful of nuts (particularly walnuts) per day as a part of a health-optimization program.

Full article originally posted on the website for Dynamic Chiropractic.